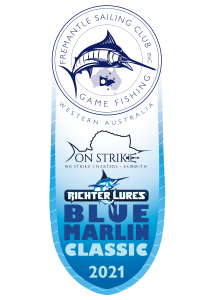 Angling and Tournament Rules
The Tournament is a sanctioned West Australian Game Fishing Association (WAGFA) event, fished under the rules governed by the Game Fishing Association of Australia (GFAA). All Billfish tagged should be verified with a photo of the tag being placed in the shoulder of the fish. All tagged fish must be revived and then released; the retrieval of hooks and lures must be attempted but the loss of will not disqualify a Tag and Release. If a Billfish is tagged and released the same lure may be reused; in the event of that lure being lost, a statutory declaration will need to be supplied. The first Tag and release will not be disqualified. All tag cards must be submitted to the Weigh Master no later than 1900 hours each day. A Tag and capture card incorrectly filled out or submitted on the incorrect card will result in a capture being disqualified. The weighing of fish and the presenting of tag cards will take place at the Rottnest Weigh Station from 1730 hours to 1830 hours on the Saturday and Sunday; the weighing and presenting of tag cards will be done at the FSC Weigh Station on the Monday between 1600 hours and 1700 hours.

Tackle may be requested by the weight master for checking.

Bill Fish and Shark Tag and release only. Sharks if tagged must be minimum of twice the line class.

Other Game Fish
Allocated weight x 100 divided by the line class. All Billfish, the minimum Line Class is 24kg. All other species minimum line class 2kgs. Any Billfish caught on a Line Class less than 24kg will be allocated points as if caught on 24kg Line Class.

Allocated Weights Tag and Release
No fish under 60cm are to be tagged with the exception of Yellowtail Kingfish which has a minimum of 70cm.

All fish will be allocated weights according to measured length with weights calculated on GFAA measure x release charts. Fish under 60cm must be photographed on the brag mat and points will be awarded according to the weight chart (must go line class). Must fill out release card.

Fish (excluding sharks) captured and weighed will be scored by replacing allocated weight with actual. The official Weigh Master for the tournament is John Cramer who can be contacted on 0407772625 or Channel 81 VHF.

Individual Angler Points
The best two point scoring fish of each species per angler per day.

Champion Boat Points The best three point scoring fish of each species per boat per day. Eagle Rays are excluded from this Tournament.